Overall the Plantation real estate market had a strong year in 2017. The number of sales increased over the previous year despite having less inventory. The number of days on the market decreased while the sale to list price ratio increased. Despite a drop in average and median prices, home values appear to be on the rise.

The decrease in average and median sale prices was a result of a change in the mix of homes sold rather than a decrease in home values. In 2017, marshfront homes made up 16% of total home sales as compared to 29% in 2016. Wooded view homes made up 55% of total sales in 2017, as compared to 33% in 2016. Marshfront land values are typically much higher than wooded-view land values. Therefore this shift in the mix of homes sold resulted in a decrease in the average sale price.

Interestingly, although the mix of homes sold shifted toward a lower price point, average and median prices per square foot increased in 2017 as compared to 2016. This is somewhat unusual and can be partially explained by the fact that the average size of homes sold decreased to 3177 square feet in 2017 from 3,446 square feet in 2016.

With wooded-view homes leading the way, the price increases of 2017 were driven by low inventory coupled with strong demand. Heading into 2018, inventory is even lower than it was in the beginning of 2017. There are currently 26 homes on the market as compared to 31 this time last year. (This number does not include under construction spec homes.) Demand seems to be relatively strong considering the number of sales more than doubled in the 4th quarter of 2017 as compared to 2016, despite lower inventory. The combination of low supply and strong demand should be a recipe for price increases in 2018.

All Villas By Type 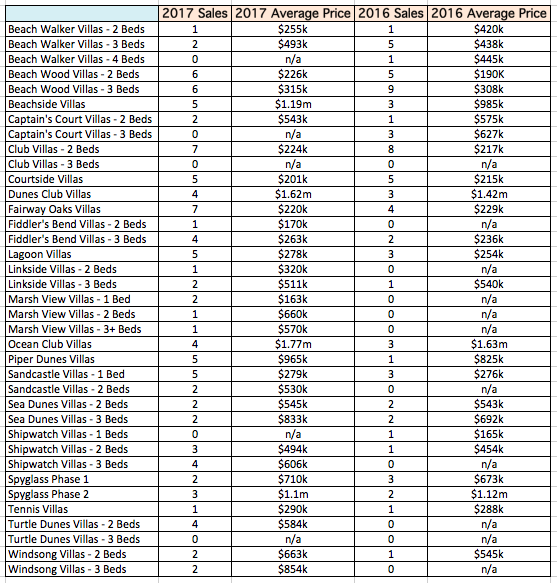 We anticipate prices to continue increasing in 2018. Inventory is still low compared to the past few years and demand appears to be strong considering the number of sales in 2017 was 25% higher than 2016, despite lower inventory. We expect the oceanfront villas built after 1991 (Beachside, Dunes Club, Ocean Club, Piper Dunes, Spyglass II) to continue leading the charge in 2018 as their inventory remains low. If cold winter weather continues across the country, we expect a busy spring and summer selling season - which is a good sign for villa sellers!